(Bloomberg) — If an energy transition is underway around the world, it hasn’t reached the streets of Ilha da Conceicao, the working-class district at the heart of Rio de Janeiro’s oil revival.

There, buses and trucks are piling into Baker Hughes Co.’s shipyard, where the energy services giant is churning out hundreds of kilometers of oil and gas piping. One street over, Exxon Mobil Corp. is loading supplies to explore the country’s biggest offshore oil fields. Royal Dutch Shell Plc and TotalEnergies SE have similar plans for later this year.

The scene points to an uncomfortable truth: First-world politicians may be trying to wean the globe off fossil fuels, but in cash-starved, resource-rich nations like Brazil, oil remains king. Outside of the U.S. and OPEC, Brazil is set to add more crude production through 2026 than any other country. Last year, while the rest of the world was throttling back on oil production in the throes of the pandemic, Brazil was one of the few that raised output, adding more than any other non-OPEC country apart from Norway. It wants to double crude output by 2030 to become the world’s fifth-largest exporter, and even if it doesn’t hit that target, low-cost oil plays have positioned the country well to emerge as one of the world’s last holdouts in the energy transition.

”We are going through the best moment in years,” said Matheus Rangel, a Rio-based oil worker that runs a YouTube channel offering tips on getting jobs in the industry. He spoke from a hotel where an entire wing is booked with oil workers heading to offshore rigs.

“The energy transition? I don’t know about that. If you have oil, you drill until the last drop.”

The nation’s world-class oil reservoirs, favorable legislation, and broad political support for oil and gas mean hundreds of millions of dollars are getting spent to find new gushers.

In 10 years time, oil majors may stop pursuing these kinds of massive expansion projects, said Schreiner Parker, the vice president for Latin America at consultancy Rystad Energy. But in the meantime they need to secure supplies that can last into the 2040s with consumption still climbing, especially in China.

So to see what’s happening in Brazil now: “It’s almost like the last hurrah,” Parker said.

While Europe and the U.S. push for aggressive climate policies that depend on a huge increase in renewables, some developing countries are lagging behind in the energy transition as they build up their economies. Brazil along with Guyana and Suriname will help Latin America account for a quarter of non-OPEC oil-production growth in the next five years, even though it only pumps 12% of non-OPEC barrels, according to projections by the International Energy Agency. Meanwhile, coal is still the principal energy source in China, which mines and burns half the world’s supply, and Russia is also still betting big on the dirtiest fuel.

This global tug-of-war shows how tough the fight will be to break free from fossil fuels even as the IEA, which represents consuming countries, has called for an oil exploration halt to save the planet.

Brazil is the most recent place on Earth where oil majors spent billions on exploration licenses before Covid crippled the world economy and sent prices crashing. The cash already committed means that even European giants Total, Equinor ASA and Shell, which have aggressive carbon reduction plans, are proceeding with drilling. On top of that, offshore fields in Brazil, unlike U.S. shale, have a longer production life, making them more cost effective. Output per well also dwarfs deep-water fields in Nigeria, the Gulf of Mexico and the North Sea, adding to resiliency in times of lower prices.

President Jair Bolsonaro, a former military man who favors industry and has been dismissive of climate concerns, is opening Brazil’s oil industry even wider to outside capital. The government is offering additional offshore licenses later this year under more attractive terms than before the pandemic.

All this makes the South Atlantic a safe haven of sorts for an industry increasingly on the run from weakening economics and more aggressive climate policies elsewhere. Brazil’s oil regulator, known as ANP, expects a fourfold increase in offshore wildcats this year to 19. Rystad expects a more modest doubling of exploration, with even more wells next year.

“All the major companies are getting ready to drill,” said Roberto Monteiro, the chief executive officer of Petro Rio SA, the Brazilian oil independent that sold $600 million in bonds in June to finance an offshore drilling program. “The action is here.”

That’s what Mary Silene is betting on. In May, she opened a bar and restaurant on Ilha da Conceicao to tap the revival in the oil port district. On a recent Tuesday, Brazilian country music known as Sertanejo was straining from the speakers as Silene took a breather after catering to port workers during the busy lunch rush. Across the street two workers from an oil pipe factory, still in their protective blue jump suits and helmets, paid for loaves of bread at a bakery.

“I managed to rent this spot here. There are shipyards, and I think things are going to grow,” said Silene, 53, who recently closed a restaurant at a fish market, which was shuttered in the pandemic. “God willing, things will rebound.”

To be sure, Brazil’s oil industry is nothing like a decade ago when expats from Houston to Oslo filled Rio’s exclusive clubs and beachfront highrises. Investments from Petroleo Brasileiro SA, or Petrobras as the Brazilian state oil titan is known, are only a fraction of the $40 billion a year it spent during the boom years.

And just because there’s more drilling going on, doesn’t mean that oil production is necessarily going to skyrocket as much as the government is predicting. Much like what’s happening in the U.S. shale fields, this burst of activity is partly needed even just to maintain current output levels as older wells start to decline.

To take production to significantly higher levels, the likes of Exxon and the other majors need to do a better job at finding more oil. None of the most recent wildcat wells in Brazil have resulted in follow-up drilling, indicating disappointing results and that the easiest-to-find deposits may have already been discovered.

It’s an interesting twist to see this fossil fuel push in a nation that was once a leader in green energy. Brazil had built a hydroelectric industry before it even started tapping offshore fields in the 1970s, and dams still provide more than 60% of the country’s electricity. But this has left the entire economy exposed to dam-crippling droughts, which have become more intense and prolonged in recent years amid climate change. That’s pushed the country to expand thermal power plants to provide greater security to the grid.

Meanwhile, an expansion of crude production will spur more exports to hungry consumers in Asia.

Latin America has traditionally relied on commodity exports to help boost local economies, and Brazil is no exception. That’s part of why crude expansion doesn’t get met with the same negative view that can be encountered in other parts of the world. Even in countries like Mexico and Argentina, where production is expected to decline or stumble along near current levels, it isn’t because governments are shunning oil.

Mexico’s left-wing administration of Andres Manuel Lopez Obrador is trying to prop up state-owned national champion Petroleos Mexicanos, even though it has suffered for years from poor management, high debt and outright corruption. In Argentina, a toxic policy mix of price and currency controls, not green initiatives, has stymied shale development.

For Bento Albuquerque, Brazil’s energy minister, the energy transition is a wake up call to find as much oil as possible before it starts getting phased out, even though the country will simultaneously pursue biofuels and look to reduce emissions from oil and gas operations to meet its climate targets.

”There is no date for when oil loses its importance, but evidently within 30 years, oil won’t have the importance it has today,” Albuquerque said, adding that’s why it’s important for Brazil to take advantage of its position now while it still can.

“The realities are different when you talk about the United States, Europe and other developed countries. Brazil is still a developing country with a large abundance of natural resources,” he said.

Even if ongoing exploration efforts fail, Petrobras has already found enough oil to keep growing for most of this decade. A giant floating oil factory currently en route to one of those fields, Sepia, is set to start pumping in August. As many as 15 floating, production, storage and offloading vessels, including the Carioca that just left a shipyard in Rio state, will come on line in the next five years, according to Rystad.

“There are more new hires all the time,” said Brenda Siqueira, a 25-year-old contractor who’s wearing the tell-tale uniform of an oil industry worker: A blue jump suit, with black gloves hanging off her belt. Her hair is pulled back in a tight bun and protective glasses rest on her head, while a white mask is pulled over her face. 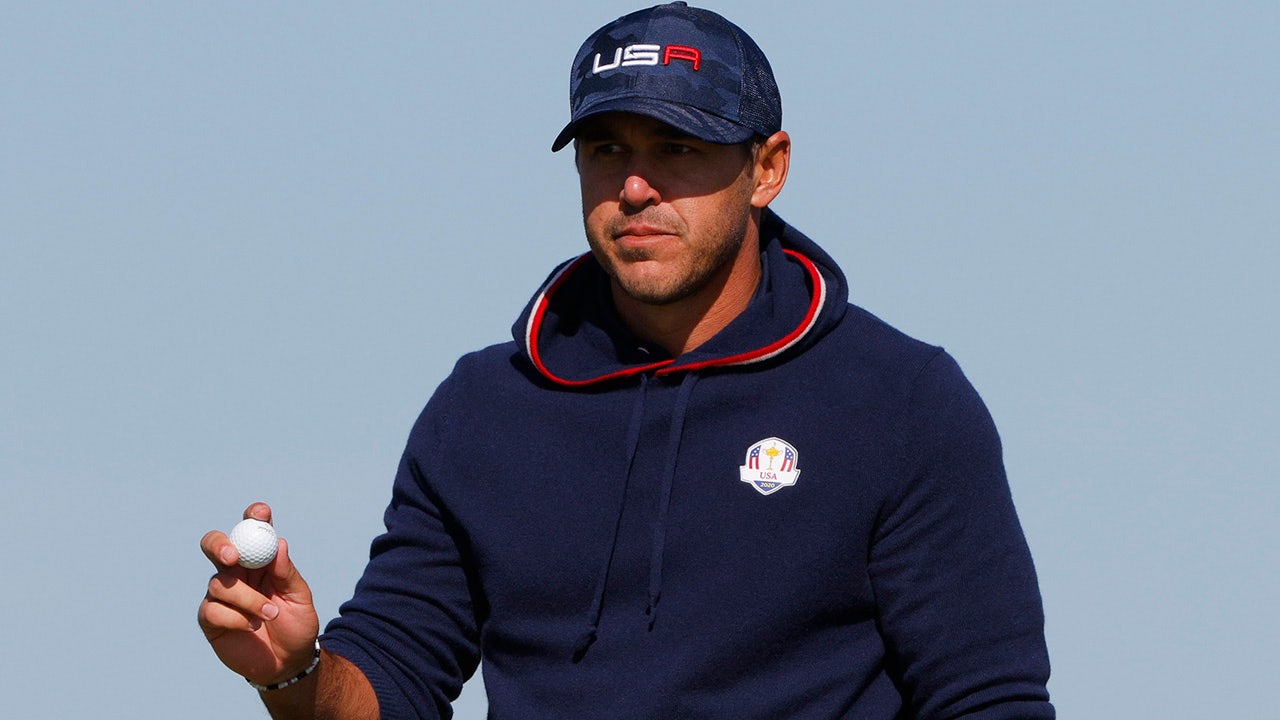 Brooks Koepka pleads with Ryder Cup official for drop: ‘Have you ever seen me hit a ball?’
3 seconds ago